Pilning Station looks to be dying not to put too fine a point on it.  It looks to be more a case of DNR than GWR. In 2016 Pilning was the third least visited station in Britain with just 46 passengers.  Then in October the footbridge was demolished as part of the grand electrification scheme and Platform 2 closed.  She is said to be too unwell to justify the million pounds for a new bridge.  She is just receiving palliative care from now on.  This year she is likely to become the second least used UK station or maybe even the first.  I thought it was time I visited in case she slips away soon.

Pilning is just south of the Severn Estuary, the first station on the line after trains emerge from the Severn Tunnel.  Just two trains a week call at Pilning, both on a Saturday and both heading towards Taunton from Cardiff.  Miss the second train and you are there for a week.  The village does have a pub and an Indian restaurant but I'm thinking the balti menu may look somewhat less appetising  after a week.

Pilning  rests quietly during the week reminiscing over the 130 years she has been open. She recalls excitement of the day in 1886 when the first steam trains past to enter the Severn Tunnel, John Hawkshaw's hard won achievement of what was to remain the longest underwater tunnel for a hundred years.  The age of steam lasted over eighty years till the diesel stalwarts of my youth like the Warships and the Westerns took over.  And now Pilning wonders if she will live to witness the first electric trains passing by.

I caught the 8am from Cardiff. The inspector was quite shocked at seeing my ticket saying it was only the second time in 15 years he'll have got off at Pilning to check I alight safely.  We pass the new replacement bridges that span the line, recently installed as part of the electrification process.  Some stanchions are already up and others lie prone on the trackside waiting to be erected. Severn Tunnel Junction station is having money thrown at it  in the form of new infrastructure, which would have made her cousin Pilning, on the opposite bank, quite jealous in younger days.

We do indeed stop at Pilning. I was half expecting the driver to sail through forgetfully.  It may have been my eyesight but I'm sure I saw someone board the train as I got off.  The busiest station in Britain is Waterloo with 99 million passengers per year.  It has 22 platforms and listed facilities include shops, public houses, trolleys, ATMs and baby changing facilities - just in case you have grown tired of yours after a long journey.  One thing it doesn't have however is a waiting room.  Well, eat your heart out Waterloo, here in Pilning is a newly painted waiting room.  Well I say waiting room, it is actually an old bus shelter but it would do the job in a downpour.

Most of the rest of the facilities are on the scare side.  It has a timetable board listing train times - both of them.  It rather amusingly has a bin with separate slots for recyclable and general waste which all feed into the same bag underneath.  It's completely empty, or was till I put my banana skin in there.  Could the next visitor check if it is still in there please.

Pilning does have friends and family.  Someone has put some boards up on the now closed Platform 2 commemorating the day it opened and closed. There is a photograph of Jonathan King - Friend of Pilning Station who passed away in 2014 and was keen to keep the plight of Pilning station in the public eye. 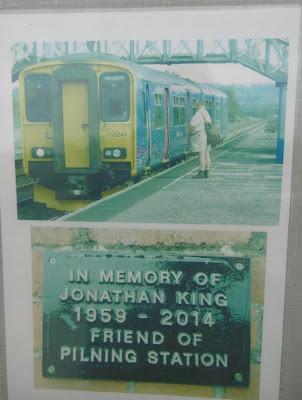 One of the notice boards welcomes travelers to Pilning station before going on to list facilities it hasn't got.  It even has a Station Manage called Carol.  Having read this I was somewhat disappointed Carol wasn't here to meet me personally, after all there are only two trains a week. She could have made an effort.  I was half tempted to give Carol a call on the number provided to discuss her role.  Where did she see herself in five years time?  Did she have ambitions to move to another station, say Denton in Tameside with 74 passengers a year?  Is stress management one of the courses offered to her by her employees? Fairs fair though, Pilning doesn't look dilapidated.  There are no weeds nor litter so I concluded she's pretty good at what she does. 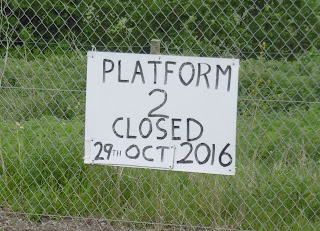 Before I knew it I was having to put on a spurt to return to Pilning station, just some five hours after I'd arrived, to ensure I didn't miss the 1.35 to  Filton Abbey Wood.  Passengers returning to Cardiff have to catch the train two stops in the wrong direction before getting off and changing platform to pick up a train to Cardiff.  You're not going to believe this but two other people arrived at Pilning station just after me to catch the 1.35 train.  Must be her busiest day of the year. 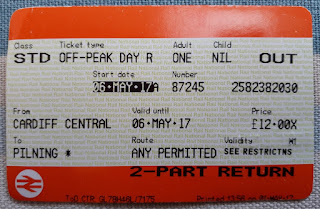 A full collection of photos from the day can be found here: Flickr Album